In this appendix, we're going to walk through an accounting simulation that illustrates how an illusory profitability gap can emerge entirely from inflation-related inaccuracies associated with historical cost accounting. To allow readers to follow along with the simulation and experiment with it, we link to a spreadsheet containing the simulation below:

Strategy for the Simulation: Four Phases

The simulation will proceed in four phases:

Phase I: Actual Real Values - In the first phase, we're going to construct a perfectly efficient hypothetical index with a cost of equity, a return on equity and a real fundamental return that are always equal to the real fundamental return observed in the S&P 500. We're also going to assume that the hypothetical index's depreciation rate and real interest rate match the average rates observed in the S&P 500. Assuming an environment of zero inflation, we're then going to compute the actual real financial quantities (assets, debt, equity, share price, EBIDA, depreciation, interest, earnings, dividends, etc.) that the hypothetical index ends up producing and accumulating over time. Note that these numbers will reflect the index's true quantities, expressed in real terms.

Phase II: Actual Nominal Values - In the second phase, we're going to upwardly-adjust the real numbers computed in Phase I to reflect what the underlying quantities would come out to if expressed in terms of a price index that is inflating at a certain specified rate. Note that these numbers will reflect the index's true quantities, expressed in nominal terms.

Phase III: Calculated Nominal Values - In the third phase, we're going to recalculate the nominal asset values, equity values, depreciation expenses and earnings in Phase II using historical cost accounting rules. Note that these nominal numbers will be distorted by the accounting framework and will not reflect actual true nominal quantities for the index. The earnings, in particular, will become overstated over time, laying the seeds for a profitability gap.

Phase IV: Calculated Real Values - In the fourth phase, we're going to apply the integrated equity methodology to the calculated nominal values in Phase III to calculate real values for the hypothetical index. Note that these real numbers will carry forward the distortions in Phase III and will not reflect actual true quantities for the index. Relative to the actual real values observed in Phase I, the index's cost of equity will show up as significantly overstated and its return on equity will show up as significantly understated, creating an illusory profitability gap.

The goal of the simulation will be to demonstrate that when we set the parameters of the hypothetical index to match the actual average parameters observed in the S&P 500 from 1964 to 2018, and we then apply historical cost accounting rules to calculate the earnings and equity values of the hypothetical index over time, the illusory numbers that we calculate end up closely matching the actual average reported numbers that we see in the S&P 500 over the period, suggesting that those numbers, and the profitability gap that they give rise to, are illusory as well.

In an effort to further mimic the S&P 500, we're going to set additional parameters for the hypothetical index as follows: 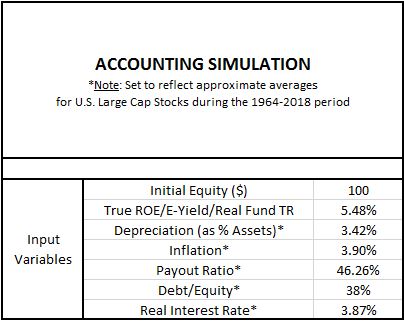 The depreciation1, inflation, payout ratio, debt-to-equity2 and real interest rate3 parameters are each chosen to match the actual average parameters observed in the U.S. Large Cap Stock Universe during the 1964 to 2018 period.

In Phase I, we calculate actual real values for the hypothetical index under the perfect efficiency assumption specified above. We start the index out in 1964 and allow it to generate earnings based on its characteristics: 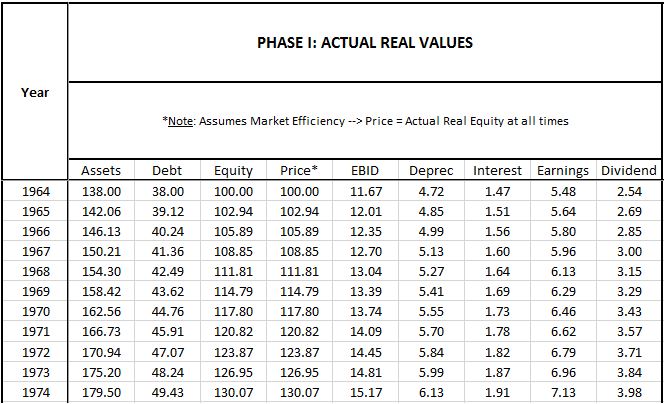 Note that all of these terms are real terms. The price index is not changing in this phase of the simulation.

Here are descriptions of how each initial 1964 term is calculated, listed in the order in which it is calculated:

The terms for subsequent years are calculated in the same way as above. The two exceptions are equity and debt:

In Phase II, we set up a consumer price index (CPI) and steadily increase it over time to match the specified inflation rate for the simulation, 3.90%. We then upwardly-adjust the real values in Phase I to accurately express them in terms of the increasing price index. 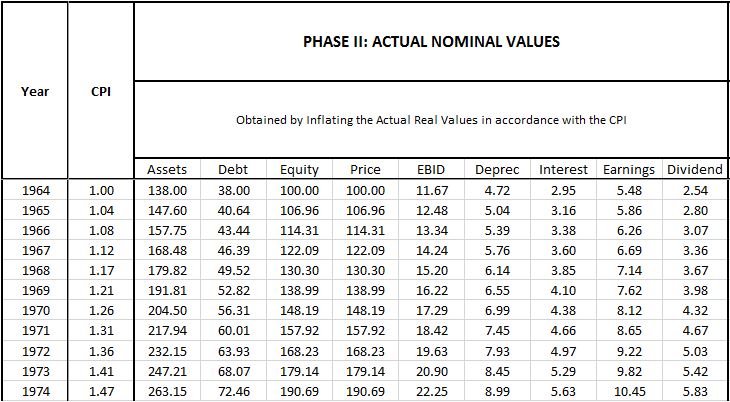 In Phase III, we calculate nominal values for the index under a historical cost accounting framework.

For directly-measurable quantities, the calculated nominal values in Phase III are identical to the actual nominal values in Phase II. The accounting paradigm cannot introduce errors into these values because they're not determined through the application of accounting rules; rather, they're determined by simply looking at the quantities themselves, which are empirical and verifiable. 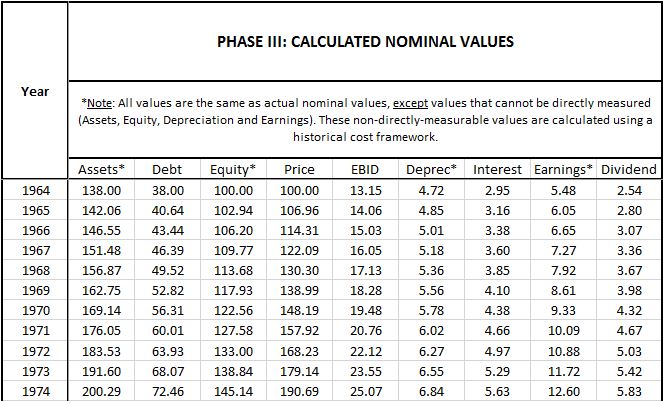 Here is a description of how each nominal term is calculated:

In Phase IV, we calculate real values for the index by applying the integrated equity methodology to the calculated nominal values in Phase III: 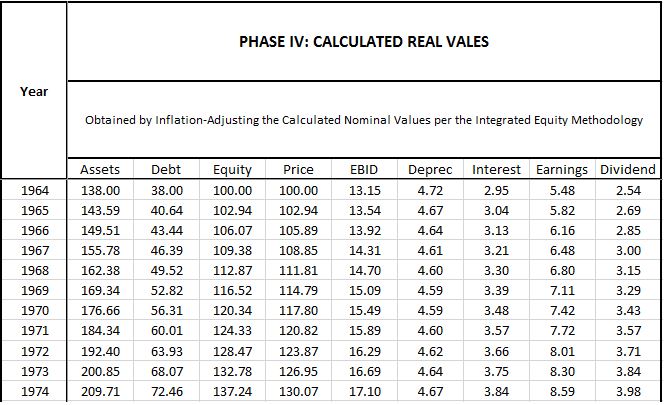 Calculating Metrics for the Index

Using values from the four phases of the simulation, we can calculate relevant metrics for the hypothetical index and observe their trajectories over time. We separate the metrics into reported, actual and integrated.

The chart below shows the trajectories of relevant metrics over time in the simulation: 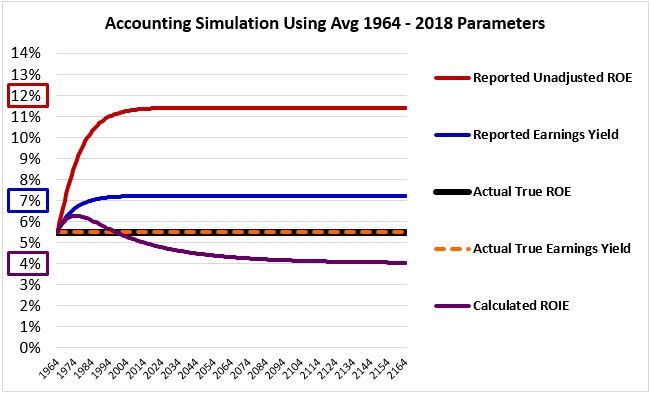 All of the metrics start out at 5.48%, which is the actual true value of all of the quantities that the metrics are seeking to represent. As inflation builds, the reported metrics and the metrics calculated in accordance with the integrated equity methodology deviate from that value:

Given that the reported earnings yield equilibrates at a value (7.21%) that's significantly higher than the calculated ROIE (3.99%), the index ends up with a large profitability gap (3.22%).

Inferring the Primary Cause of the S&P 500's Profitability Gap

The simulation confirms what we already knew, which is that a perfectly-efficient index can develop an illusory profitability gap entirely from distortions associated with historical cost accounting. What we didn't know, and what we still don't know, is how much of the S&P 500's actual profitability gap is due to those distortions.

Recall that we set the environmental and operational parameters of the simulated index to be equal to the actual average parameters observed in the S&P 500 from 1964 to 2018. By comparing (1) the illusory profitability gap that emerges at equilibrium in the simulation due to flawed accounting and (2) the actual profitability gap seen in the actual S&P 500 over the period, we can estimate the relative contribution that accounting distortions are making to the actual gap.

The juxtaposed chart below facilitates the comparison. When we compare the differences between the blue line and the purple line in the simulation and the actual S&P 500, we see similar numbers for the lines (approximately 7% and 4%, respectively) and a similar gap between them (approximately 3%):

In the table below, we compare the metrics calculated in the simulation at equilibrium to the actual average calculated metrics for the S&P 500 over the period:

As you can see, the metrics match each other very closely. We discuss each metric below:

The fact that the metrics line up so closely is strong evidence that the majority of the profitability gap observed in the actual S&P 500 is due to inflation-related earnings overstatement associated with the use of a historical cost framework. It's possible, and likely, that earnings have been overstated across history in other ways and for other reasons, but the historical cost reason is likely the main reason.

Estimating the Severity of Earnings Overstatement as a Function of Inflation

At equilibrium, the degree of earnings overstatement that emerges in the simulation is 32%. This number is associated with an inflation rate of 3.90%. By running the simulation at other rates of inflation, we can build a mapping between the inflation rate and the severity of earnings overstatement more generally. When comparing valuations across different periods of history, we can then use the mapping to correct for relevant differences in inflation.

In the table below, we show the degree of overstatement that emerges in the simulation under inflation rates ranging from 0% to 10%: 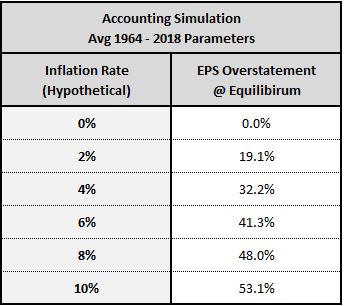 1 This term also includes the depletion of natural resources and the amortization of intangible assets.

2 The average debt-to-equity ratio for the period is calculated using nonfinancial corporate debt in the numerator and nonfinancial corporate net worth at market value in the denominator, both of which are obtained from the flow of funds report (Z.1, B.103). Reported company equity cannot be used in the calculation of debt-to-equity because it is carried at historical cost and is therefore severely understated relative to reality.

3 The real interest rate is calculated as the average of Moody's seasoned AAA and BAA bond yields minus the inflation rate.